The idea of making academic material “open access,” or free of charge and free of many (if not all) copyright restrictions emerged in the 1990s. As Peter Suber, one of the leaders of the movement, has put it, “What makes it possible is the internet and the consent of the author or copyright-holder" ("A Very Brief Introduction to Open Access," 2004. Read Suber’s detailed overview of the subject in his free ebook, Open Access).

The term “open access” (OA) gained traction with theBudapest Open Access Initiative of 2002, a meeting of international scholars devoted to expanding the accessibility of published research. The rise of the internet made it much easier to disseminate academic material to a much broader audience. Librarians became particular advocates based on the ongoing increase in journal subscription fees and flatlining library budgets. OA as a trend has grown since then, and has become an international movement. Though it began with a focus primarily on scientific research, it has expanded to include research in all branches of academia, with a particular focus on scientific research that is funded by the government: members of the public are paying for that research, so they should also be able to read it.

OA has developed both within and in contrast to the structure of traditional publishing, so to explain OA, we must first discuss traditional academic journal publishing. While there are also open access books, the movement has more generally focused on journals and articles. 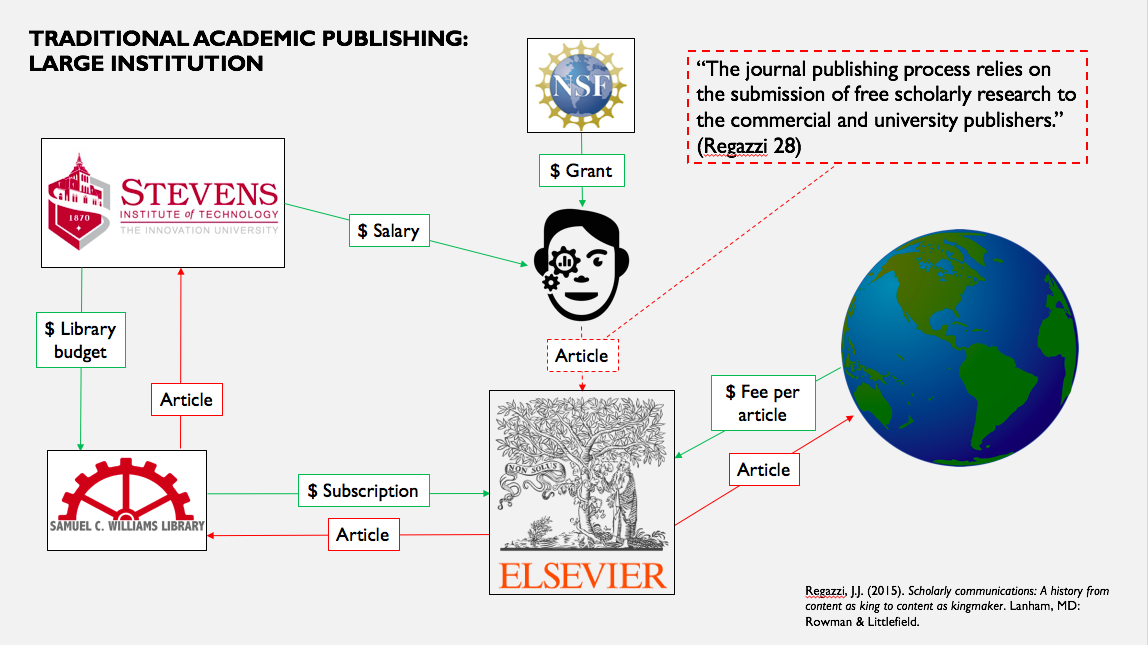 Academic journal publishing as it occurred before and since the development of the internet has generally involved research performed by a scholar who is housed at an institution and funded either by that institution or an external funder (Figure 1, center). Based on that research, the scholar writes an article, which is given to a publisher to publish. No money trades hands at this point; the scholar is not paid for the article or the rights to it but instead gets the more intangible benefit of a publishing credit, which counts toward that scholar’s promotion and tenure process at the institution. The publisher then publishes the article in a journal, to which the library pays fees in exchange for print and/or digital access. The library is funded by the institution, and allocates subscription funds from its budget.

Publishers have traditionally added economic value to the article through peer review, editing, formatting, and distributing it. However, printing and distribution costs have been reduced with the rise of digital publishing. The rise of subscription databases has also led to more restrictive access placed on the journals and articles through the use of database license agreements rather than the distribution of physical print copies. 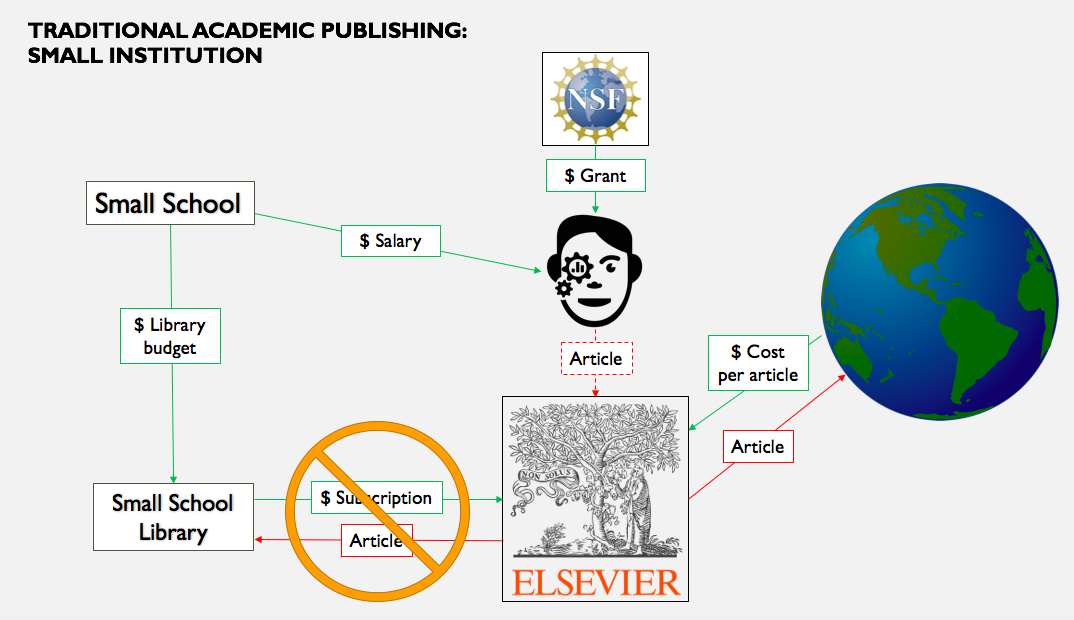 One of the drawbacks of traditional publishing is that not every institution can afford to subscribe to these journals, especially as prices have increased. So scholars at these institutions - smaller, or in developing countries (Figure 2) - are unable to access the research they need or even that which they have published themselves. 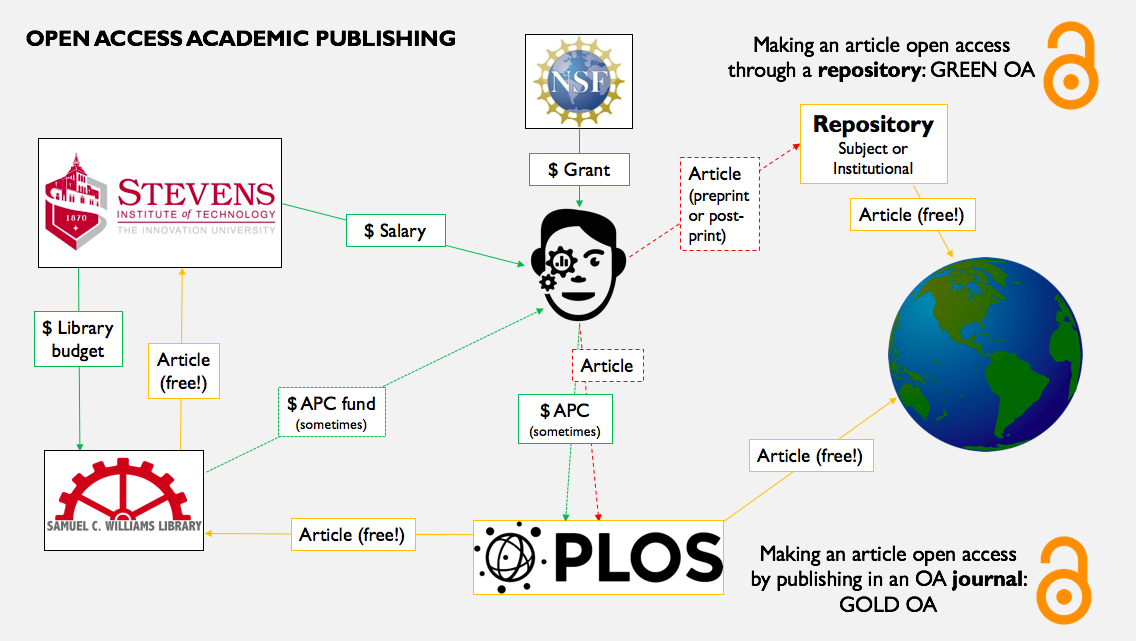 To counter the drawbacks of traditional publishing, open access has developed in two major ways, “Gold” publishing and “Green” repositories (Figure 3), through which the articles are published in scholarly journals and are then made available for free to anyone with internet access. Gold open access refers to academic publishers who make their articles available online to the world, either through fully OA journals (such asPLOS One) or through a hybrid of OA and traditional in which some articles are available OA but not others. Both OA and hybrid journals are peer-reviewed like traditional journals. A database of OA journals can be found at theDirectory of Open Access Journals (DOAJ). Articles in Gold journals are sometimes funded by Article Processing Charges (APCs). Many academic libraries have begun offering their faculty assistance with these fees, as these journals are free and thus the library saves money on subscriptions. Grant funders have also started including funding for APCs in their awards.

Another means of making an article open access is by archiving it in a “Green” repository. This follows the traditional means of publishing but the author retains the right to self-archive a pre- or post-print version of the article (that is, an article before it has been formatted and published by the journal) in either an institutional repository run by the author’s institution, or a subject-specific repository that includes the work of authors from multiple institutions (such asPubMed orarXiv). This way, the traditionally published article is still available in the journal, but a version of the text of the article is available to the world through the repository. Publishers very often impose embargos for self-archiving articles, and you may find a citation for an article that links back to the publisher page rather than the full-text during the length of that embargo.

A list of publishers that allow authors to deposit their articles in repositories and how long, if any, their embargo periods are can be found at the SHERPA/RoMEO publisher copyright policies & self-archiving database:Publishers allowing unrestricted use of their PDFs in repositories.

More information can be found at the Library’s Open Access Research Guide.